And from the shelter of my mind
Through the window of my eyes
I gaze beyond the rain-drenched streets
To England where my heart lies. —Paul Simon, Kathy's Song, 1966 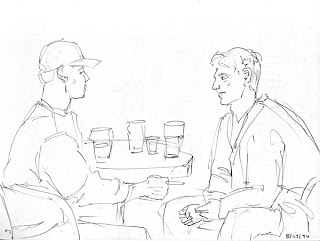 1994 was a bad year for me. I went through several disasters, climaxing in a permanent separation from my first wife. For many months, my head felt like a grenade with the pin pulled out. This feeling added disturbing depth to routine tasks like walking to work and getting home with the groceries. I sweated a lot, and worried I might forget where I lived. 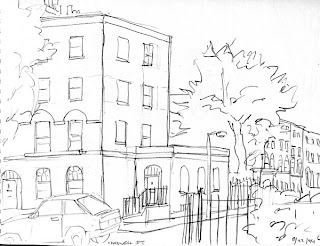 Lucky, my family and friends weren't willing to let me go down. They literally saved my life in a hundred ways. Several years before, I had worked with a young man from Northern Ireland named Jason Coppel. Now Jason offered me lodging at the flat he shared with his brother Toby in London, while Jason took a long holiday. I'd never been to England, and wanted to visit. I had almost no money,but I did have three weeks' vacation accrued at my job. Traveling scared me, but so did staying. I scraped my pennies together and bought a plane ticket.
Jason and Toby's flat was elegant, much nicer than my apartment in San Francisco. Toby stoically tolerated my presence; I almost never saw him. 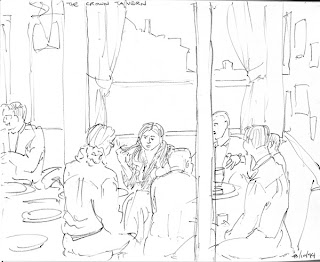 Day and night I explored London, on foot, bicycle and bus. At night I drew people in the pubs and sidewalk cafes. 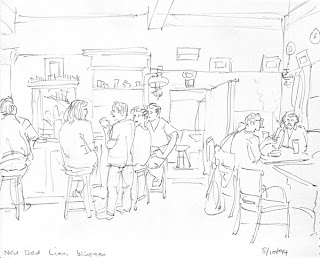 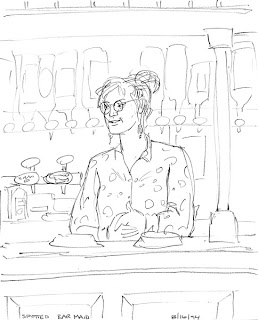 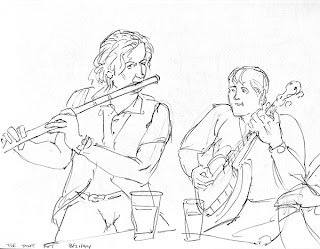 Many musicians played traditional English and Celtic folk music at night. I was thrilled to hear them. This music had been important to me since I first heard it in Philadelphia in the early 1980s. The musicians in the drawing above were members of a band, The Northern Celts, who played at a pub called The Pint Pot. 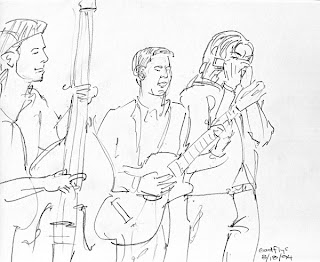 Jason's parents spent money wisely. When their children went off to college, instead of paying rent for their lodging, they bought a flat in the college town, then charged other students rent to cover the note. They owned another flat in Edinburgh, and Toby encouraged me to take the train up there, while I was visiting the island.
The Edinburgh Coppel was out of town, so I introduced myself to his flat-mates, a good looking young couple named Stephen and Zoe. Zoe was a perfect little doll, with honey hair and blue eyes. When I saw her I immediately heard Robert Burns's song in my head:
As I was walking one fine summer's evening
'a walkin doon by the Broomie Law
'twas there I met wi' a fair young maiden
She'd cherry cheeks and skin like snaw.
Zoe spoke in a standard English accent in Edinburgh, but when she got on the phone with her girlfriend back in Northern Ireland, she sang a lilting melody I scarcely could believe: "And how are you and Paddy doin? Does it still feel like love, Lass?" She actually used the word "lass." Surely this world was a good place, after all. 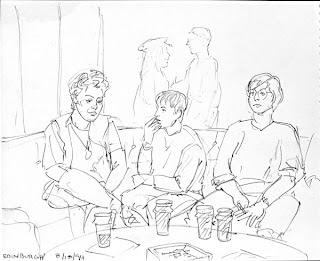 I arrived during the famous Edinburgh Festival, when the city was given over to theater and music. I went each night to The Acoustic Music Center, where I could hear a sampler of musical acts at the festival. The music, the crowd and the Guiness helped me pass pleasant evenings in the far north. 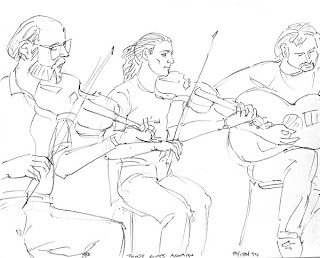 I am grateful to everyone who put up with me in Britain, and helped me through a difficult time. I close with a journal entry from my last days in London:
Tonight I rode the 19 bus through town and across the river at Battersea Bridge. The sunset turned crimson and purple over the roofs and the river. I walked back across Albert Bridge. The narrow streets of Chelsea were silent. The buildings were beautifully designed and well cared for. Row upon row, and block after block, each group named “—— Mansions,” and true mansions they were. Flowers waited in the window boxes, big old bicycles leaned against the railings, and I heard their riders, talking quietly in the upper floors.
Posted by John Paul Turnage at 11:52 AM