Showing posts from February, 2012
Show all

Max, Basketball, and the End of Our World 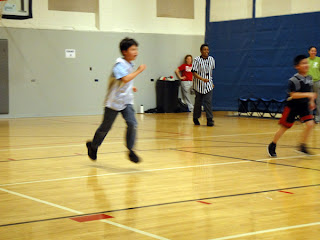 Basketball The day Max was born, I began dreading the inevitable re-involvement with sports. I hate sports. My last competition was a picnic softball game in 1982. I slid into home plate, ripped a knee out of my one pair of blue jeans, and called it a career. No one regretted my departure. In the years that followed, sports receded further from my consciousness, until they looked like rituals from another planet. Misa was no more enthusiastic or adept than I was. Despite this heredity, Max wants to play basketball. Misa and I are all in favor, because it gets him working together with other kids. I took him out to practice. It did not go well. I yelled at him continually to play ball, and he collapsed in frustration.  Then came the first game. We got to be sports parents, exploding with anxiety, yelling our lungs out.  Max got off to a slow start, but he ran down court with his team and retrieved a rebound or two. When the other guys passed to him, he
Post a Comment
Read more
More posts