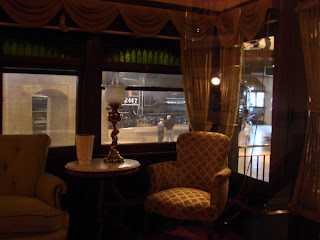 Last week I was privileged to visit the California State Railroad Museum in Sacramento. My wife and I took our son, who is nuts for trains and anything related to trains. The equipment in these photos looks ancient to us in 2010, but some of it was in use as recently as the 1970s. To me, this environment doesn't just look old; it looks more comfortable than anything I've traveled in. 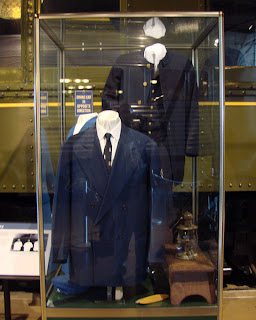 The people who worked on these trains dressed for success, even the men who shined shoes in the toilet compartment. Believe it or not, there was a time when Americans dressed well. Granted, these employees were forced to dress well, but the benefit was the same.  Everyone contributed to the atmosphere of competent service. Always and everywhere, it helps to look like you know what you're doing. 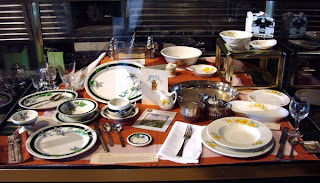 Their dishes. It hardly seems possible, does it? I flew first class once. I appreciated the service, but it was a backyard barbeque compared to this royal table. 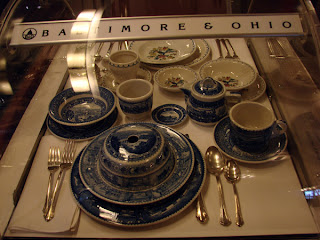 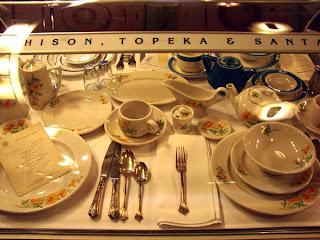 All this beauty reminded me of a surprising facet of modern life. Today, by every important measure, most Americans are better off than the people who rode these trains. We have more resources and better choices than they did. Nevertheless, we often live poorly. We wear ragged, farm hand clothes. We eat bland, stale food from styrofoam containers. 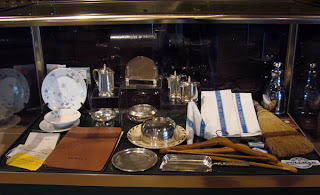 I'm often accosted by people who are upset over "the gap between rich and poor," as though I could influence it. I heard this harangue while working at Burger King for $2 an hour.  If you are upset by this gap, a casual stroll through The Superficial may cheer you up. You will see recent photos of young hollywood stars and starlets, sucking sugared coffee from the same paper Starbucks cup that you and I get for $1.70. Despite their millions, they often look like they were released from prison just yesterday, and slept on the sidewalk last night. Equality of income may elude us, but equality under bad hygiene is within our grasp. 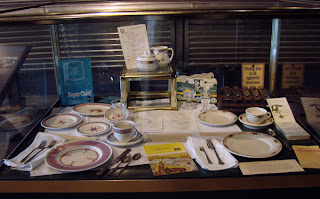 I don't know why we've slobbed out in our abundance; could be pure laziness, or something more complicated. I do know our disheveled personal environment contains enormous opportunity. If you offer people any reminder of elegance, they are nearly helpless. They are powerfully driven to follow you and give you what you ask for. Recently an attorney friend of mine was hired at a law firm in southern California. After a few weeks, the partner who had interviewed him confided that other candidates presented better credentials. The principal reason for hiring my friend: he was the only candidate who arrived at the interview wearing a suit. During the 1940s, the suit wouldn't knock out the entire competition, but today its a magic bullet. If you have the misfortune of getting "displaced" from your job, you could spend $70,000 on a Masters program, or you could go shine your shoes, and see how far that gets you. No, you can't shine flip-flops . . . .
on April 12, 2010 No comments: 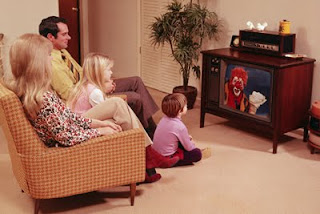 PLEASE NOTE: I do not crusade against television; the whole world may watch it and love it. Enjoy.
The oldest game between people is: "Look at this!" All my life, I've struggled with a small mind, limited attention span, limited mental and physical energy. I'm easily distracted and easily exhausted. My tank is never far from empty. I feel like a kid, let loose in Disneyland, with only twenty-five cents to spend. I often envy people who can keep many different interests going at once. They can work their job, volunteer at the zoo, study Tibetan and train for a triathlon simultaneously. I can't even keep houseplants alive; that requires more bandwidth than I have to spare. This poverty of resources forced me to give up watching television when I was nineteen years old.
This development surprised me, because TV was a constant influence my parents' house. It was on every single day, like a light switch. I heard many more words from the TV than from my parents. My parents even gave me my own set for Christmas one year, and I felt grown up, having it in my room. I watched almost every night until 1AM, when the signal went off and the screen went dead [forgotten antiquity!]. This environment being all I'd known, I didn't desire—or even imagine—life without TV. 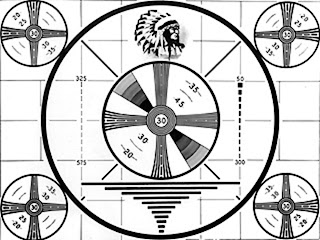 After high school, I stayed in my parents' house and worked a series of unpleasant jobs. One night I came home after a long day of class and night of work. As I scrounged around the kitchen, I heard voices from a dramatic show. A father character was beating his teenage daughter with a belt while his wife screamed, “No! Don’t! Beat me instead! Beat me!” The sound hit my tired nerves. I looked into the den, and it was empty. No one was watching this crap, but they left the set on anyway, just to fill the silence.  The horror, the stupidity, the self-punishment of the program infuriated me.  I vowed to stop watching television. Except for special news events. I have only seen TV sporadically from that day to this.
Two things surprised me as I quit. The first was how easy it was to give up TV. I’d grown up in the blue light, and expected to go through withdrawal from the “addiction.” Instead, it was like waking from a bad dream, a relaxing relief, no effort at all. In a few weeks, when I did see TV it looked disturbing to me. I had no desire for it. Secondly, the improvement in my life shocked me. I felt lighter, hopeful, much happier. TV constantly begs for attention, and one powerful handle it grabs is our fear of violence and death. Evolution forces us to pay maximum attention to threats, so the more threatening the portrayal, the bigger the audience. Watching TV is like pasting electrodes to my skin and getting random shocks until I’m exhausted and my brain is scrambled. I didn’t understand this until much later. Maybe all that is beside the point. The worst thing about TV is: It's not about me. It's not about you, either, but that may not bother you. 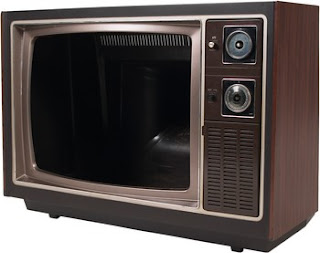 Many people reacted strongly against me when they found out I didn't watch TV. They thought I was punishing myself, as if I were sleeping on a bed of nails. Some took my abstinence as a personal insult. My late neighbor, Anton LaVey, wrote some very entertaining quips about the devotion to TV. He claimed all the power of modern media, agreeing with fundamentalist Christians that TV was a tool of Satan:
Instead of obeying the holy bible, right or wrong, TV advertising now instructs what to buy and what not to buy. Atheism wasn’t tolerated when scriptural dictates were in fashion and accepted as the Word. Now, thanks to Satanic infiltration, it’s safe to say, ‘I don’t believe in God.’ But modern heresy—not conforming to a television lifestyle, not accepting television truths—is liable to be punished with as much righteous enthusiasm as ever.—Anton Szandor LaVey, The Devil’s Notebook
Now I have a six-year-old son, and I'm grateful that his schedule isn't determined by what's on the air. Of course, a great deal of video content is available on YouTube, etc. It's bite-sized TV. The clips can be started, stopped, forwarded through. Best of all, they don't subject young minds to commercials [usually].